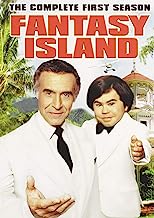 One of the definitive TV shows of the 1970s originally aspired to the dark moral complexity of anthology shows like The Twilight Zone. Even diehard fans will have to admit Fantasy Island fell short of its goal--but that didn't stop it from becoming hugely popular, lasting for seven powerhouse seasons. All the most iconic elements were present from the beginning: Diminutive Tattoo (Herve Villechaize, The Man with the Golden Gun) shouting "De plane! De plane!"; infinitely gracious Mr. Roarke (Ricardo Montalban, Star Trek II: The Wrath of Khan) commanding "Smiles, everyone, smiles," before delivering pages of exposition with his implacable Latin gravitas; the white suits; the tropical island that somehow has all the vegetation and weather patterns in the world; the pageant of celebrities from Jim Backus to Karen Valentine, Barbi Benton to Don Knotts--it all added up to sneakily addictive television. After all, wish-fulfillment--be it a schlub who wants to be irresistible to chicks or kids who want their separated parents to reconcile or a former cheerleading team who want to relive their high school glory days--had a built-in narrative hook, even though the resolution (various versions of "be careful what you wish for") was never in doubt. Almost every episode bubbled over with sex, revenge, ambition, and regret, delivered with a shameless lack of subtlety. Over the course of the first season, the interplay between Montalban and Villechaize--each armed with an intriguing exotic accent--became more and more prominent, with Mr. Roarke becoming increasingly supernatural while Tattoo oozed the mortal sins of greed and lechery. Turn on any episode; you'll find it hard to stop watching, no matter how cheesy or ludicrous the storyline. This four-dvd set includes the original TV movie pilot, its sequel, and the 16 episode first season, as well as a couple of largely bland featurettes enlivened by the occasional barbed comment from executive producer Leonard Goldberg. --Bret Fetzer